Walking down Church Street in San Francisco to look at a building I saw a familiar image. A Catholic church that played a role in the 1992 film “Sister Act” with Whoopie Goldberg. My kids were young and (it seems) so was I. It reminded me of a time many years ago in Salzburg, Austria while waiting in line at a tourist attraction I fell into conversation with a tourist from Australia. He was rattling on 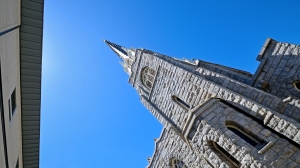 about four weeks of ABC, ABC. I asked what he’d been doing for those four weeks and he explained, “ABC: another bloody church, another bloody castle.” Have to give credit those of strong religious conviction, they know how to create iconic buildings.