Posted on May 13, 2016 by JN Real Estate Appraisal & Valuation Services

In response to a photo challenge from Cheri Lucas Rowlands I’d like to introduce you to a friend of mine… Meet Johnny Smoke. 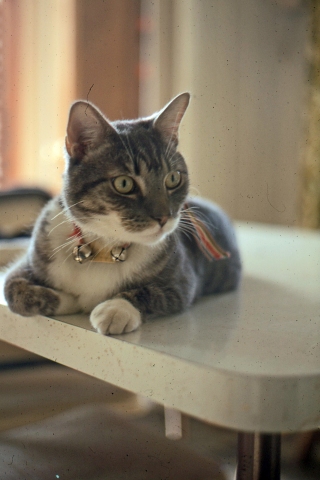 One day my mom grabbed me and said, “Come along, I want to get a cat.” No clue as to why. Mom was like that. Soon we found ourselves at a nearby SPCA browsing tabbies. She liked a little gray kitten. He would be called Johnny Smoke. Johnny, you see, was a 1960s anti-smoking, horse-riding cigarette who told of the evils of smoking. Johnny, the cat, was a lean gray cigarette of a cat so the name fit well.

The photo of Johnny is from 1972. He was a grown kitty by then. As cats go, Johnny was quirky. Oh yes, people will tell you all cats are quirky. Well, they don’t know quirky.

Here are some facts about Johnny Smoke to prove my point. Johnny and my mom used to torment each other. Mom would attack Johnny and Johnny would attack mom. We’re talking full frontal assaults. I once saw Johnny leap from a hiding place beneath a table latch onto my mother’s shoulder and bite her neck before fleeing for safety. Love bites. Johnny, as you might expect, hated women. I once saw him corner my two small nieces in the living room. Creeping like a lion about to take down an antelope. The two little girls huddled, holding each other, quietly asking help as he moved in. He loved to chew on my sister’s long hair. He also ruled the neighborhood. My neighbors police-trained German Shepard was terrified of him. I saw him smack the nose of a 60-pound Weimaraner hunting dog and the poor puppy turned and ran for the hills… not returning until Johnny got back into the car in which he came. Yes, Johnny liked to go for car rides. Johnny had two rat buddies… you know, the big white lab rat kind. They used to nap together. When Johnny wanted in the house he would leap about six feet to the screen covering a back window and meow loudly until he got our attention.

Even with all of the trouble that Johnny Smoke could bring… he had a face my mother loved.